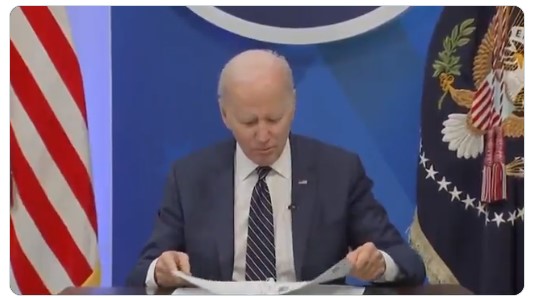 Biden has been accused of plagiarism, racism, sexual misbehavior, and, most recently, mental decline for over 40 years. Many believe Biden and his handlers have failed to assist Joe in dealing with his ailments.

On Friday, Joe appeared to be deliberately indifferent in fielding questions from reporters. Instead of professionally addressing the media who yelled questions at the nation’s Chief Executive Officer, Joe ignored them and continued to flip through papers.

Several news sites broadcast video showing Biden moving through documents, seemingly unconcerned about the commotion going on around him.

“Does Joe Biden think it’s a smart idea for him to refuse to answer any questions?” Townhall enquired.

Does Joe Biden feel good about refusing to answer any questions? pic.twitter.com/vET7ZzO9EP

The White House later provided a transcript of President Xi’s call, which focused primarily on Russia and the ongoing assault of Ukraine.

President Joseph R. Biden, Jr. and President Xi Jinping of the People’s Republic of China spoke today (PRC). The subject of the discussion was Russia’s unprovoked invasion of Ukraine.

According to the statement, Biden discussed with Xi the US’ attempts, in collaboration with allies and partners, to deter Russia from carrying out the invasion — as well as efforts to impair Russia’s financial system once the invasion was underway. He also warned Xi that if China offered Russia the kind of military or financial help that many western nations have given Ukraine, the rest of the world would react negatively.

During the ongoing invasion of Ukraine, Russia has asked both financial and tactical assistance from China, which Russian President Vladimir Putin is said to believe will be over in a matter of days rather than weeks.

According to the transcript of the call, Biden highlighted Taiwan, reportedly reminding Xi that US policy on Taiwan “has not changed” and that the US would oppose any move by China to change the status quo.