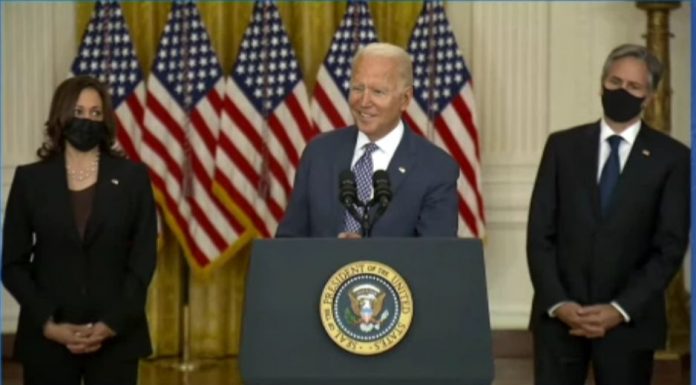 The president took questions for a pre-determined list of reporters. However, he was still grilled by the White House press staff, especially Justin Sink (a Bloomberg reporter) who questioned his judgment.

“Now, Justin Sink of Bloomberg,” the president read from a notecard as Vice President Kamala Harris and Secretary of State Tony Blinken stood nearby.

“You just said that you would keep a laser focus on counter-terrorism efforts and that you don’t see as great of a threat of terrorism from Afghanistan as other parts of the world,” Sink said, referring to Biden’s recent ABC News interview.

“But if you and your administration so badly misassessed how quickly the Taliban would sweep through Afghanistan, and we no longer have an embassy there from which to run intelligence operations, how can you at all be confident of your assessment of the risk of terrorism and the ability of the U.S. to conduct over the horizon missions to keep it in check?” Sink stated.

“Can you tell Americans that they are safe and that they will remain safe from terror attacks in Afghanistan?” Sink continued.

“I think you’re comparing apples and oranges,’ Biden said with a smile as Harris looked on with an expression of concern.

“One question was whether or not the Afghan forces we trained up would stay and fight in their own civil war they had going on,” Biden replied, completely misrepresenting the question.

“No one — I shouldn’t say ‘no one’,” he said out loud, apparently recalling that he had earlier lied about this subject. “The consensus was that it was highly unlikely that in 11 days they would collapse and fall and the leader of Afghanistan would flee the country.”

“That’s a very different question than whether or not there is the ability to observe whether or not large groups of terrorists begin to accumulate in a particular area in Afghanistan to plot against the United States of America.”

“That’s why we retained an over-the-horizon capability to go in and do something about that if that occurs, if that occurs,” Biden added without providing specifics.

Sink followed up on his original query after receiving a rambling reply.

“Sir, just on that initial assessment, we learned over the last 24 hours that there was a dissent cable from the State Department…” Sink stated.

“Sure,” Biden said, showing that he was aware of it.

“Saying that the Taliban would come faster through Afghanistan,” Sink continued. “Can you say why, after that cable was issued, the U.S. didn’t do more to get Americans out?”

“We had all kinds of cables, all kinds of advice,” Biden replied. “Have you noticed? They range from this group saying — they didn’t say it… would fall, when it did fall, but saying that it would fall to others saying it wouldn’t happen for a long time and they would be able to sustain themselves through the end of the year.”

“I made the decision,” Biden said. “The buck stops with me.”

These words were spoken by Biden before he left for Delaware on Saturday for the 18th time in his presidency. At 2:30 p.m., the White House put a lid on it.